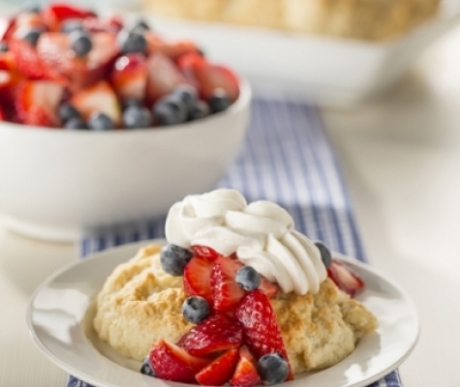 Gradually stir in milk until a soft dough forms. Drop the dough into eight mounds on a lightly greased baking sheet. Bake in a preheated 425-degree oven for about 12 minutes, or until lightly browned.

Cool on a wire rack.

In a small bowl, combine strawberries, blueberries and orange juice. Add sugar, according to taste, until sweetened. Set aside. Pour the whipping cream into a large mixing bowl. Mix on medium speed until slightly thickened, then turn to high, continuing to mix until soft peaks have formed. Stop the mixer, add honey, then continue to beat with the mixer until thoroughly combined.

Slice each shortcake in half horizontally. Place bottom halves on plates, then top with whipped cream and berries. Add a shortcake top to each.